What Do Muslims Believe About Jesus?

Muslims respect Jesus (peace be upon him) and await his second coming. They consider him one of the greatest of God’s messengers to mankind…

A Muslim never refers to him simply as ‘Jesus’, but always adds the phrase “peace be upon him.” The Qur’an confirms his virgin birth (a chapter of the Qur’an is entitled ‘Mary’) in her time, and Mary is considered the purest woman in all creation. The Qur’an describes the creation of Jesus as follows:
“Behold! the angels said, `God has chosen you, and purified you, and chosen you above the women of all nations. O Mary, God gives you glad tidings of a word from Him, whose name shall be the Messiah, Jesus son of Mary, honored in this world and the Hereafter, and one that shall speak to the people from his cradle and in maturity, and shall be of the righteous.’ She said: ‘O my Lord! How shall I have a son when no man has touched me?’ He said: `Even so; God creates what He wills. When He decrees a thing, He but says to it, “Be!” and it is.” (Qur’an 3:42-47)

During his prophetic mission, Jesus (peace be upon him) was granted and performed many miracles. The Qur’an tells us that he said:
“I have come to you with a sign from your Lord: I make for you out of the clay, as it were, the figure of a bird, and breathe into it and it becomes a bird by Allah’s leave. And I heal the blind and the lepers, and I raise the dead by Allah’s leave.” [Qur’an 3:49]

Other miracles include speaking soon after birth in defense of his mother’s piety. God’s other gifts to him included healing the ones born blind and the sick, reviving the dead, and, most importantly, the message he was carrying. These miracles were granted to him by God to establish him as a prophet. According to the Qur’an, he was not crucified, but only appeared so; instead, Allah took him up to Himself; (Qur’an, Chapter Al-Nisa)

Five Main Responsibilities of Holy Quran on each & every Muslim:

1. To accept by heart that the Holy Quran is from Allah (SWT)
2. To recite it regularly with correct pronunciation (Tajweed).
3. To understand what message has been given by Allah (SWT) to mankind.
4. To act accordingly.
5. To convey the true message of Allah (SWT) to others.

What most of the Muslims are doing they are using the holy Quran either for Husool-e-Sawab or Isaal-e-Sawab only. Whereas Allah(SWT) revealed Holy Quran as an Instruction Manual for mankind. We must try to check what we are doing is correct and according to the way of Prophet Muhammad (PBUH) and his true followers.

We are putting our all efforts to gain benefits of the present life which is going to be end soon. But we are not ready to do an effort to learn Arabic to understand the message of Allah (SWT). If someone says that the German language is the only criteria for getting a visa of Germany we will definitely try our best to learn german but for getting the visa for the paradise, where there is no end of life, we are reluctant to learn arabic. If we don’t understand the true message how we are going to follow it and convey it to others. On the day of judgement, these non-muslims will ask Allah(SWT) that these Muslims were the custodian of the Quran but they never conveyed to us your true message. just imagine what will be our reply then.

What we can do from right now that at least recite Quran with understanding till we learn Arabic so that we could be able to fulfill the responsibilities of the holy Quran and convey the true message from Allah (SWT) to mankind.

May Allah (SWT) Give us Hidaya and courage to do our duty properly. Aameen.

Islam Is Superstitions And Irrational Beliefs?

Islam is a religion without any mythology. Its teachings are simple and intelligible. It is free from superstitions and irrational beliefs. The oneness of God, the prophethood of Muhammad, and the concept of life after death are the basic articles of its faith. They are based on reason and sound logic. All of the teachings of Islam flow from those basic beliefs and are simple and straightforward. There is no hierarchy of priests, no far-fetched abstractions, no complicated rites or rituals.

Everybody may approach the Qur’an directly and translate its dictates into practice. Islam awakens in man the faculty of reason and exhorts him to use his intellect. It enjoins him to see things in the light of reality. The Qur’an advises him to seek knowledge and invoke Allah to expand his awareness: “… My Lord! Increase me in knowledge.” (Qur’an, 20:114)

It is reported that the Prophet Muhammad (peace be upon him) said: “He who leaves his home in search of knowledge (walks) in the path of God.” (At Tirmidhi) He also said: “Seeking knowledge is obligatory upon every Muslim.” (Ibn Majah and Al-Bayhaqi) This is how Islam brings man out of the world of superstition and darkness and initiates him into the world of knowledge and light.

Again, Islam is a practical religion and does not allow indulgence in empty and futile theorizing. It says that faith is not a mere profession of beliefs, but rather it is the very mainspring of life. Righteous conduct must follow belief in Allah. Religion is something to be practiced and not an object of mere lip service.

The Qur’an says: “…Those who believed (in the Oneness of Allah) and work righteousness, Tuba (all kinds of happiness) is for them, and a beautiful place of (final) return.” (Qur’an, 13:29)

The Prophet Muhammad (peace be upon him) is also reported to have said: “Allah does not accept belief if it is not expressed in deeds, and does not accept deeds if they do not conform to belief.” (At-Tabarani)

Thus Islam’s simplicity, rationality, and practicality are what characterize Islam as a unique and true religion.

Worship In Islam Not Limited To Religious Rituals

IN the Holy Qur’an, God tells human beings that they were created in order to worship Him alone and that the basis of all true worship is God-consciousness. Since the teachings of Islam encompass all aspects of life and ethics, God-consciousness is encouraged in all human affairs. Islam makes it clear that all human acts are acts of worship if they are done for God alone and in accordance to His Divine Law. As such, worship in Islam is not limited to religious rituals. The teachings of Islam act as a mercy and a healing for the human soul, and such qualities as humility, sincerity, patience, and charity are strongly encouraged. Additionally, Islam condemns pride and self-righteousness, since Almighty Allah is the only judge of human righteousness.

The Islamic view of the nature of man is also realistic and well-balanced. Human beings are not believed to be inherently sinful but are seen as equally capable of both good and evil. Islam also teaches that faith and action go hand-in-hand. God has given people free will, and the measure of one’s faith is one’s deeds and actions. However, human beings have also been created weak and regularly fall into sin. This is the nature of the human being as created by God in His Wisdom, and it is not inherently “corrupt” or in need of repair. This is because the avenue of repentance is always open to all human beings, and Almighty Allah loves the repentant sinner more than one who does not sin at all. The true balance of an Islamic life is established by having a healthy fear of God as well as a sincere belief in His infinite Mercy. A life without fear of God leads to sin and disobedience while believing that we have sinned so much that God will not possibly forgive us only leads to despair.

In light of this, Islam teaches that: only the misguided despair of the Mercy of their Lord. Additionally, the Holy Qur’an, which was revealed to Prophet Muhammad (peace be upon him), contains a great number of teachings about life hereafter and the Day of Judgment. Due to this, Muslims believe that all human beings will ultimately be judged by God for their beliefs and actions in their earthly lives. In judging human beings, Almighty Allah will be both Merciful and Just, and people will only be judged for what they were capable of. Suffice it to say, Islam teaches that life is a test and that all human beings will be accountable before God. A sincere belief in life hereafter is key to leading a well-balanced and moral life. Otherwise, life is viewed as an end in itself, which causes human beings to become utterly selfish, materialistic, and immoral.

Islam teaches that true happiness can only be secured by living a life full of God-consciousness and being contented with what God has given us. Additionally, true “freedom” is freedom from being controlled by our base human desires and being ruled by man-made ideologies. This stands in stark contrast to the view of many people in the modern world, who consider “freedom” to be the ability to satisfy all of their desires without inhibition. The clear and comprehensive guidance of Islam gives human beings a well-defined purpose and direction in life.

In addition to being members of the human brotherhood of Islam, its well-balanced and practical teachings are a source of spiritual comfort, guidance, and morality. A direct and clear relationship with Almighty Allah, as well as the sense of purpose and belonging that one feels as a Muslim, frees a person from the many worries of everyday life. In short, the Islamic way of life is pure and wholesome. It builds self-discipline and self-control through regular prayer and fasting and frees human beings from superstition and all sorts of racial, ethnic, and national prejudices. By accepting to live a God-conscious life, and realizing that the only thing that distinguishes people in the sight of God is their consciousness of Him, a person’s true human dignity is realized. 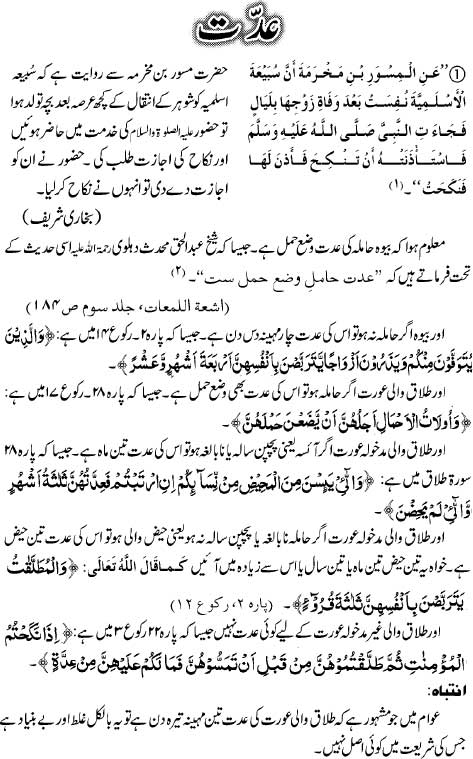 Obedience To The Command Of Allah Is An Obligatory Duty

Allah, the Exalted, says:
“But no, by your Rubb, they can have no Faith, until they make you (O Muhammad (PBUH)) judge in all disputes between them, and find in themselves no resistance against your decisions, and accept (them) with full submission.” (4:65)

“The only saying of the faithful believers, when they are called to Allah (His Words, the Qur’an) and His Messenger (PBUH), to judge between them, is that they say: `We hear and we obey.’ And such are the successful (who will live forever in Jannah).” (24:51)

Commentary: We learn from this Hadith that initially every person was answerable for thoughts and doubts even those which crossed his mind; something on which nobody had any control. The Companions of the Prophet (PBUH) were naturally disturbed by this situation. But when they heard and obeyed the orders of the Prophet (PBUH) then Almighty Allah revoked this order with the elaboration that He does not put anyone to trouble beyond his capacity. It is, therefore, essential for every Muslim to obey all the Injunctions of Allah because none of it is such that he is unable to carry out.