5 Things About Battle Of Badr

The Battle of Badr took place on the seventeenth of Ramadan, two years after Prophet Muhammad’s (peace be upon him) Hijrah (emigration) to Madina. Here’s more information about the battle, which was the first armed conflict that the Muslims were ever engaged in.

Jihad Against The Self

Fighting the evil within us is more difficult than fighting on a battlefield. Ibn Qayyim mentions in Za’d Al-Ma’ad the four states of Jihad against the self:

First: To strive in learning guidance and the religion of truth, without which there will be no success. Indeed, there can be no true happiness, nor any delight in this world and in the Hereafter, except through it.

Second: Strive to act upon what has been learned, since knowledge without action will not benefit, rather it will cause harm.

Third: Strive to invite others towards it and to teach those who do not know, otherwise you may be considered among those who hide what Allah has revealed of guidance and clear explanation. Such knowledge will neither benefit, nor save a person from the punishment of Allah.

Fourth: Strive to be patient and persevering against those who oppose this da’wah (call) to Allah and those who seek to cause harm – patiently bearing all these hardships for the sake of Allah.

When a person succeeds in all these four stages, he is considered to be amongst the Rabbaniyyun (Allah’s men). Early scholars have agreed that a scholar does not deserve the title of Rabbani until he recognizes and knows the truth, acts upon it and teaches it to others. So whosoever has the knowledge, acts upon it, and teaches this knowledge to others, is considered among the “Rabbaniyyun.”

Narrated Abu Huraira: Allah’s Apostle said, “None is wounded in Allah’s Cause but will come on the Day of Resurrection with his wound bleeding. The thing that will come out of his wound will be the color of blood, but its smell will be the smell of musk.”

It has been narrated on the authority of Abu Huraira that the Messenger of Allah (may peace upon him) said: Allah has undertaken to look after the affairs of one who goes out to fight in His way believing in Him and affirming the truth of His Apostles. He is committed to His care that Re will either admit him to Paradise or bring him back to his home from where he set out with a reward or (his share of) booty. By the Being in Whose Hand is the life of Muhammad. If a person gets wounded in the way of Allah, he will come on the Day of Judgment with his wound in the same condition as it was when it was first inflicted; its color is the color of blood but its smell will be the smell of musk. By, the Being in Whose Hand is Muhammad’s life, if it were not to be too hard upon the Muslim. I would not lag behind any expedition which is going to fight for the cause of Allah. But I do not have abundant means to provide them (the Mujahids) with riding beasts, nor have they (i. e. all of them) abundant means (to provide themselves with all the means of Jihad) so that they could be left behind. By the Being in Whose Hand is Mubammgls lac, I love to fight in the way of Allah and be killed, to fight and again be killed and to fight again and be killed.

Narrated Abu Huraira:
I heard Allah’s Apostle saying, “The example of a Mujahid in Allah’s Cause– and Allah knows better who really strives in His Cause—- is like a person who fasts and prays continuously. Allah guarantees that He will admit the Mujahid in His Cause into Paradise if he is killed, otherwise He will return him to his home safely with rewards and war booty.”

It has been narrated on the authority of Abu Huraira who said: Allah has undertaken to provide for one who leaves his home (only) to fight for His cause and to affirm the truth of His word; Allah will either admit him to Paradise or will bring him back home from where he had come out, with his reward and booty.

Abu Hurairah said: “I heard the Messenger of Allah صلی اللہ علیہ وآلہ وسلم say: ‘The parable of Mujahid (who strives in the cause of Allah) — and Allah knows best who strives in the cause of Allah — is that of one who fasts and prays Qiyam (continually). Allah has promised Mujahid (who strives in His cause), that He will either cause him to die and admit him to Paradise or, He will bring him back safely with whatever he has earned of reward or spoils of war.” (Sahih) 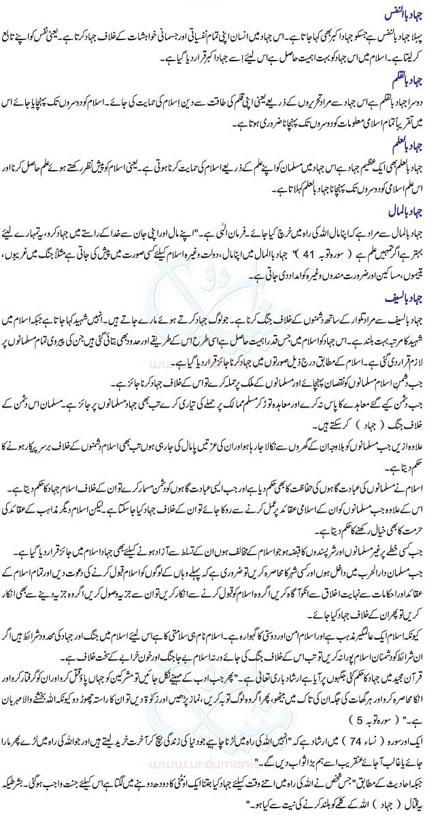